concert   Museum Nocturne
SMAK Museum, Jan Hoetplein GHENT
NOVEMBER 4
concerts during the evening opening of the museum with exhibitions and other activities

Geoffrey Burton is an internationally renowned guitarist. He played with Arno, Iggy Pop, Daan, PJDS, The Rhythm Junks and Triggerfinger, among others, and is a full-time member of Hong Kong Dong. He also makes music for theater & soundtracks.

As a solo artist he pushes the traditional genres 'rock', 'pop' or 'jazz' aside and explores fresh directions and possibilities. 2020 saw the release of his first solo album 'Me Ta Podia'. It is an instrumental record, recorded fully on guitar, and is deeply rooted in electronic music. Burton uses his guitar as a sound generator, as well as an instrument for composing.

20H: Socioloog Rolando Vázquez gives a lecture in the context of the exhibition 'Native Brazil/Alien Brazil' by Anna Bella Geiger -  On Decolonial Aesthesis

From his research as a decolonial thinker, Rolando Vázquez argues that we cannot achieve a truthful understanding of our present without coloniality, that is, without destroying the earth and erasing worlds that perpetuate our everyday reality.

Coloniality as a de-worldly historical movement circulates not only through the economy and the state, but also through aesthetics, through the forms in which we represent and experience our reality. The decolonial aesthetic is a critique of modern aesthetics and seeks that which is silenced under the normativity of the contemporary.

dr. Rolando Vázquez is currently associate professor of Sociology at University College Roosevelt, in Middelburg, and president of University College Utrecht. Since 2010, he has been co-director of the annual Decolonial Summer School with Walter Mignolo. In 2016, under the direction of Gloria Wekker, he co-authored the 'Let's do Diversity' report of the Diversity Committee of the University of Amsterdam.

In 2020 he published Vistas of Modernity: Decolonial aesthesis and the End of the Contemporary and in 2021 he published the essay 'A new Bauhaus? The debate for a more inclusive Europe' in response to Commission President Ursula von der Leyen's new European Green Deal.

As Jeroen Van Herzeele's music grows in maturity, he seems to dig his way deeper and deeper through John Coltrane's work. His spiritually and constant search for the foundations of music inspires Jeroen endlessly. That spirit houses the quartet that Jeroen once put together at the request of the late summer fest Jazz In 't Park. It is definetly an international band that exudes world class. Fabian Fiorini is an extremely virtuoso and original pianist. His background ranges from classical to jazz and ethnic music. Home player Giovanni Barcella calls himself a “drummer-poet”. He fills the room with Italian passion and has a big heart for all sincere and contrarian forms of music. Manolo Cabras on bass is the newcomer of the quartet. He has the impossible task of replacing the late master Jean-Jacques Avenel, but carries undoubtedly the idiom and musical skills to be the final piece necessary to relaunch Jeroen's strong quartet, hitting great stages once again.
The efficiency and power with which the band plays is impressive. The quartet is less interested in harmony, melody or rhythm, but uses volume, texture, tone color and the interest in sound as a basis for improvisation. 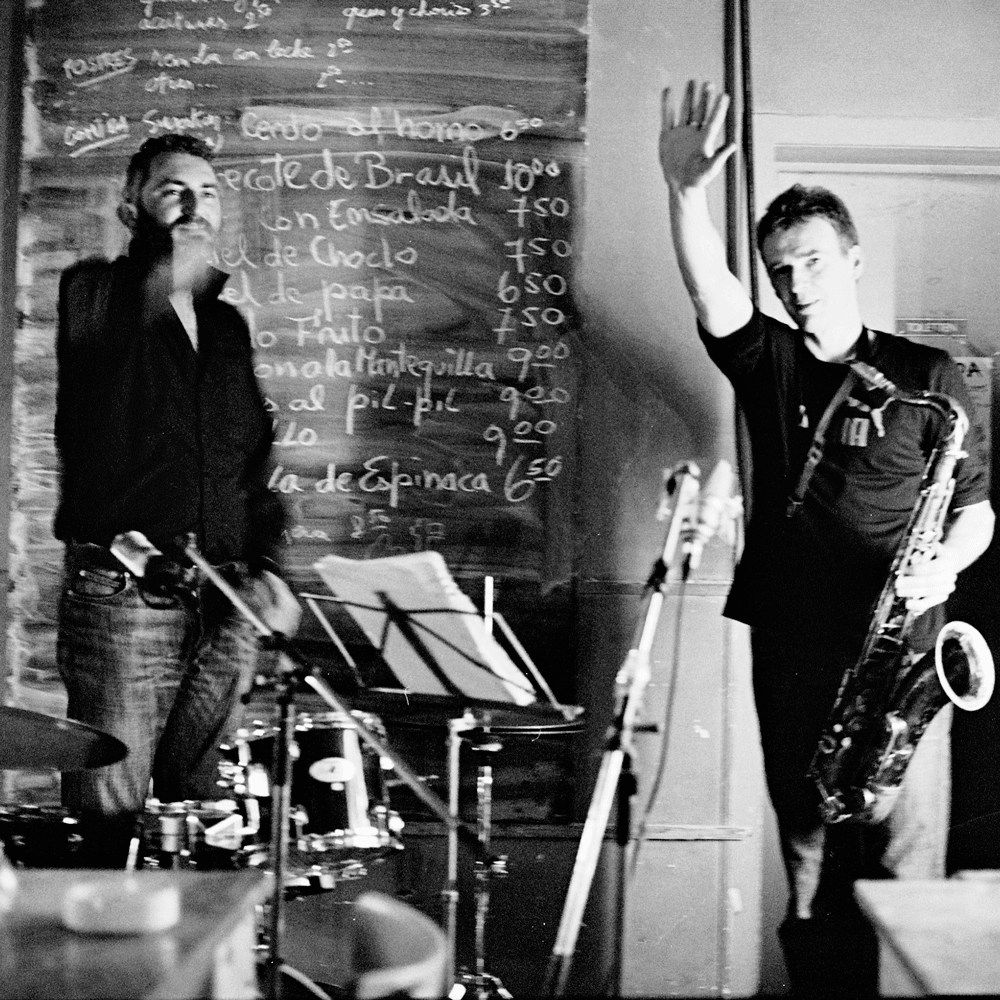