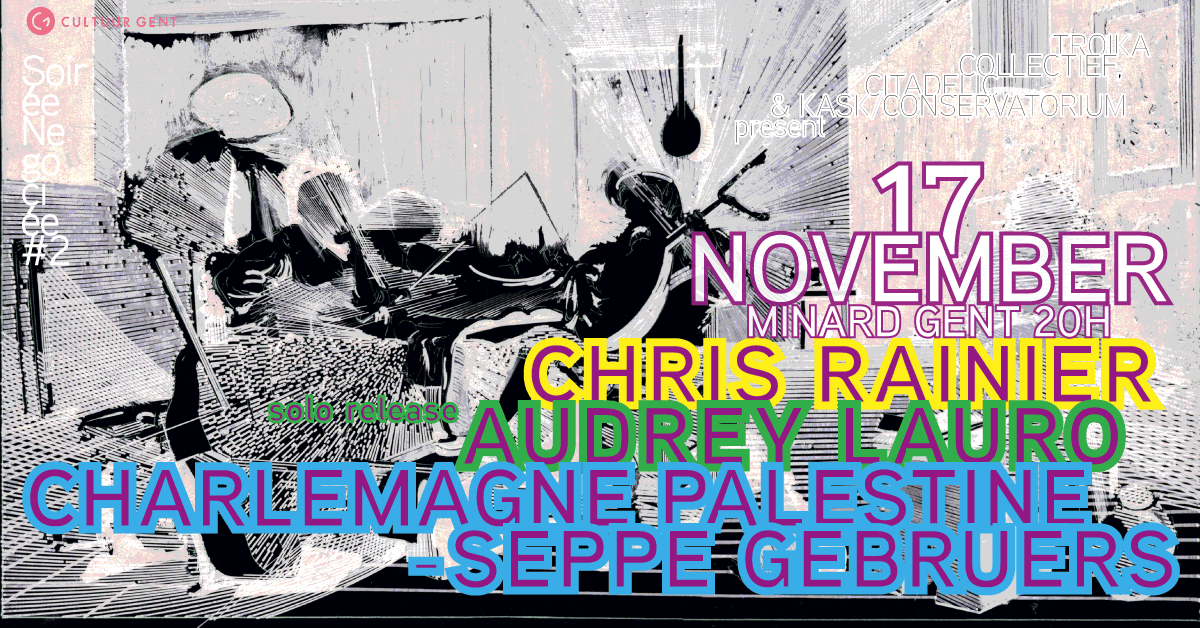 At a soiree negociee, Citadelic always invites a different musical sparring partner. For this second edition we interact with Troika, a brave collective of like-minded improvisers, who release albums and organize shows and are based in Ghent.


Chris Rainier is a South-African born multi-instrumentalist, performer, composer/improviser and visual artist from Melbourne, Australia, now based in London. His merits as a performer, a PhD scholar and as a lecturer on composer and instrument inventor Harry Partch have taken him to most continents. Working closely together with craftsman he has been able to create replicas of some of Harry Partch’s unique musical instruments, with a particular focus on the composer’s various microtonally adapted guitars.
Rainier is a modernist. He’s in touch with the past century of musical experimentation, and self-consciously selects from that history ideas that will suit his own purposes. 2022 brings two releases, one of his interpretations of Partch's early compositions for voice and microtonal acoustic guitars - mostly dating back to the 1940's - as well as a new album of his own original compositions for voice and his replica of Partch's Adapted Guitar 1.

Brussels-based saxophonist Audrey Lauro was trained in composition, jazz and contemporary music at the Koninklijk Conservatorium Brussels and the Conservatoire Royal de Liège.
Devoting her energies to experimental music and particularly to improvisation, constantly questioning the language of instrument, phrase and sonic event, she has been over the years regarirly involved in multidisciplinary music projects by ChampdAction as "Hold Your Horses", a Grand trash opera in 27 acts (2013), "P-TRAINS (Astrin Phosphora)" (2013), "HRZSCHMRZ", an opera with the spotlight on ‘love’ and the ever advancing digital world or working in collaboration with art houses like Q02 (workspace for experimental music and sound art based in Brussels), B R O N K S (Theater for a young audience / Brussels) and The National Theater "La Monnaie"


Charlemagne Palestine you can call a phenomenon, a living legend in Brussels, not only for being part of the underground art scene of New York for decades.
His performances are notorious. Cuddly stuffed animals which he considers divinities, embellish these events in abundance. Though associated with minimalist music he proclaims himself as a maximalist.

Seppe Gebruers is a Belgian pianist, improviser and composer. He performs with an urge and integrity befitting his position as uncompromising trendsetter in Belgian jazz.
His intense, physical playing has already been heard in a number of striking trios, including with Luís Vicente and Onno Govaert, or Hugo Antunes and Paul Lovens, an icon of free jazz (see album The Room).
For the last 10 years, he decided to play two pianos tuned in quartertones so that he could explore and introduce microtonal music in improvisation. As a composer, he created music for films (such as Etangs Noirs and The Reconstruction) and theatre (Tibaldus).
Beside that, he is the co-founder and artistic leader of the improvisation collective called Troika vzw. Seppe Gebruers started his research at KASK with the title ‘Unexplored possibilities of contemporary improvisation and the influence of microtonality in the creation process’.